After winning the toss and electing to take the ball first, the Falcons offence unfortunately struggled to move the ball consistently on the first drive, which resulted in a 4 and Out. 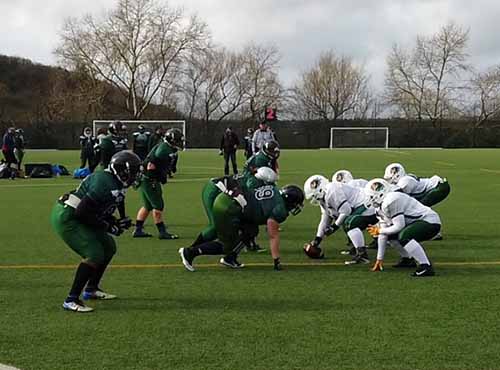 From there the Falcons defence got off to a great start with a defensive safety on the very first possession by Cardiff, with Amanda Dyne tackling the ball carrier in the end zone. Despite some good plays by the offence the following Falcons drives were back to back 4 and outs. The defence looked to repeat their earlier feat, looking to sack the Valkyries QB in the end zone for another safety. Yet somehow she managed to evade 2 or 3 tacklers and make it a foot race down the sideline for the first of Cardiffs touchdowns.

Key injuries in the offensive back field and offensive line meant that the Falcons had to try out other aspects of their playbook, resulting in a couple of turnovers. These turnovers left the Falcons defending a short field, which unfortunately lead to more touchdowns by the Valkyries.

There were some promising signs, especially when Collette Wong moved to running back, with Chloe Smith taking her first ever snaps at quarterback. However, this didn’t materialise into any scores for the Falcons.

The Falcons made the tough decision to forfeit the second game against the Cheshire Bears due to player injuries sustained in the first game, which left shortages in key positions.

The Falcons Women now turn their attention to the Division 2 Finals on March 14th, where they will play the Kent Exiles in their first game.