Leicester Falcons completed their perfect regular season with a 43-6 dismantling of Doncaster Mustangs on Sunday. Tolu Ogundana was the star man, setting a Falcons all-time record with 280 rushing yards alongside a hat-trick of touchdowns.

The Falcons didn’t have it all their own way and were stunned when Doncaster raced out to an early lead. Mustangs quarterback Sam Foulds was the centrepiece with two long runs before a quick pass gave Doncaster a 6-0 lead, the first time the Falcons had been behind in a game all season. The Falcons offence, missing several pieces due to injury and holidays, took its time to get going, although had an early score from quarterback Nick Whitehead ruled out for a holding penalty. It was the second quarter before the Falcons finally got on the scoresheet thanks to Ogundana, who rushed in from 40 yards on a mazy run. After Chadwick Whittaker returned a punt for another disallowed score, fullback Adam Gumbs plunged over the goal line from a short distance for a 14-6 halftime score.

In the second half the Falcons began to run away with it, racking up long rush after long rush. Ogundana added his second from the halfway line before Ashton Patterson, who ran for his century, added a score of his own. Ogundana’s third touchdown was the pick of the bunch, starting on the team’s own three yard line before putting the Mustangs defence on skates, cutting one way then the other before breaking away for a huge score. Finally, rookie Bradley Wroe added a short yardage touchdown and a 43-6 victory.

The Falcons now face the playoffs, needing to win through two rounds to confirm promotion to the Premier Division. The first round is on August 19th where they will face either Lancashire Wolverines or Northumberland Lightning. 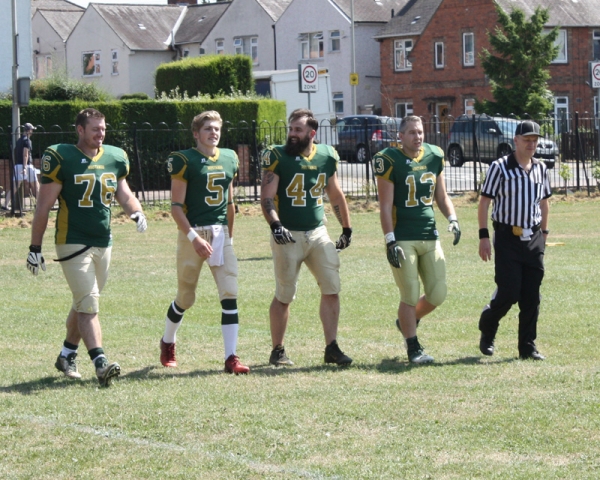 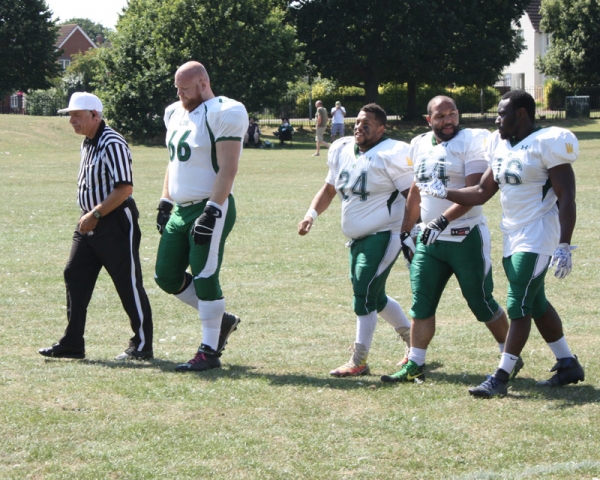 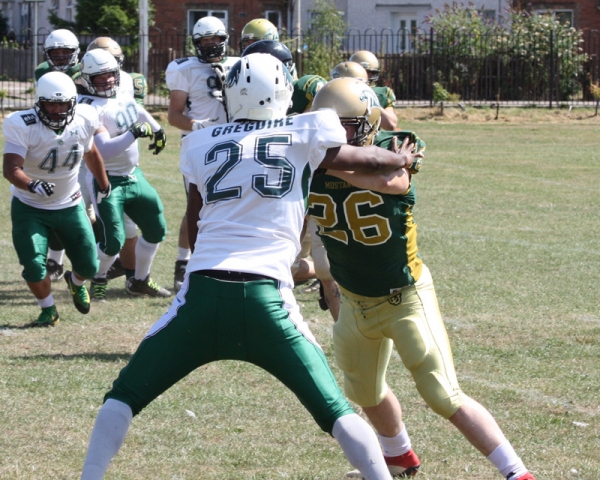 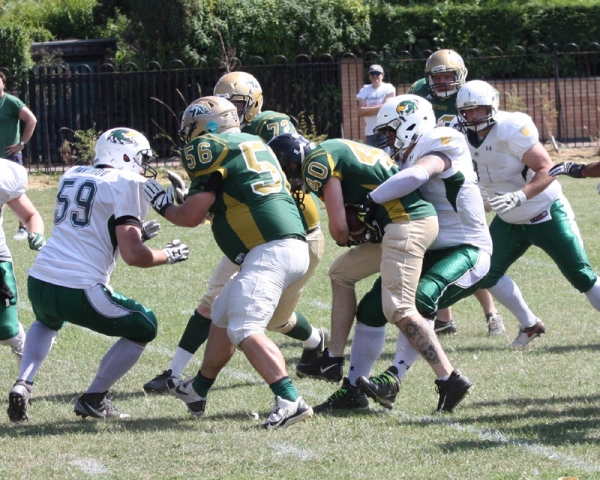 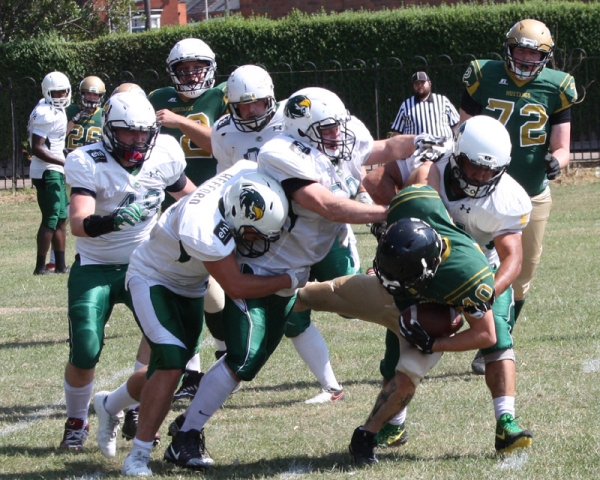 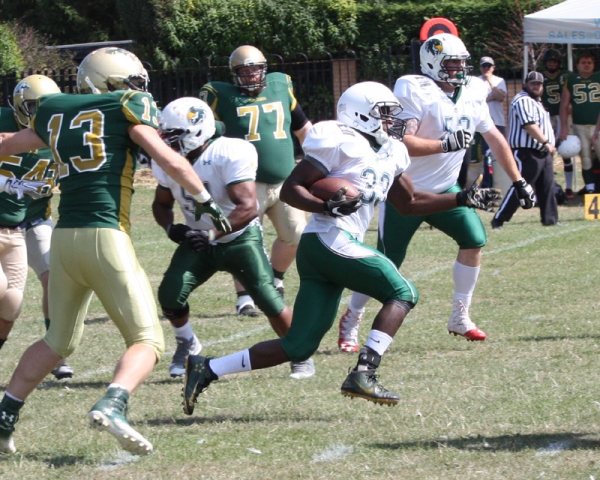 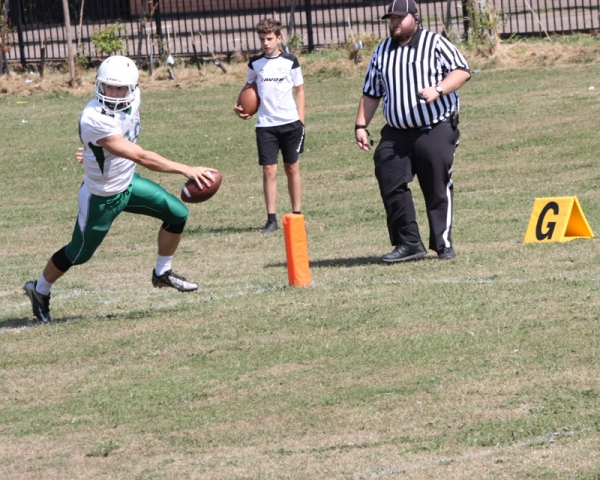 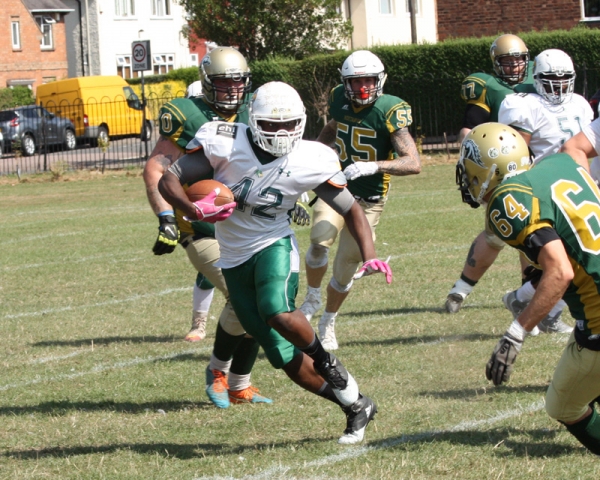 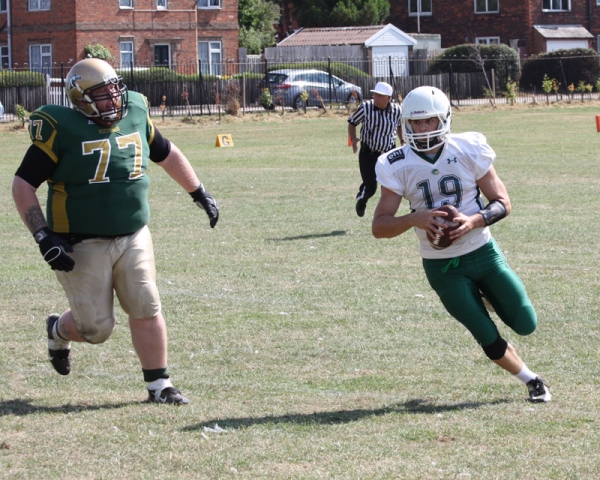 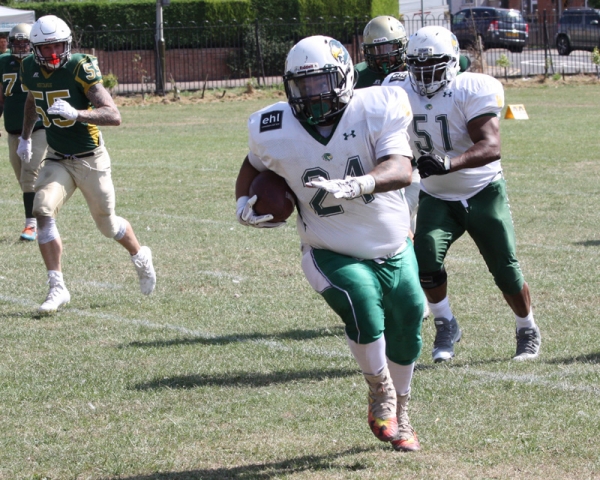 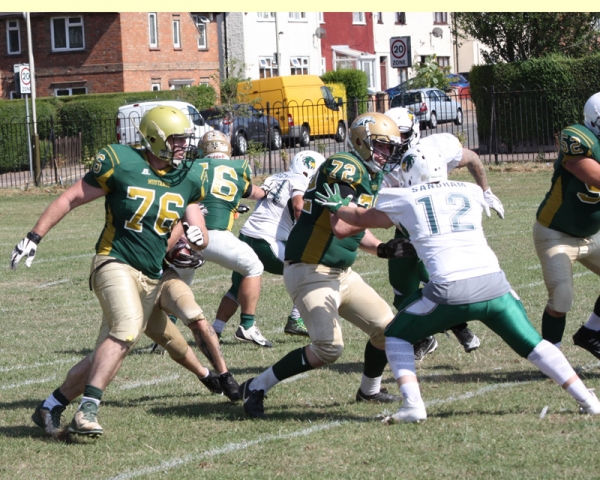 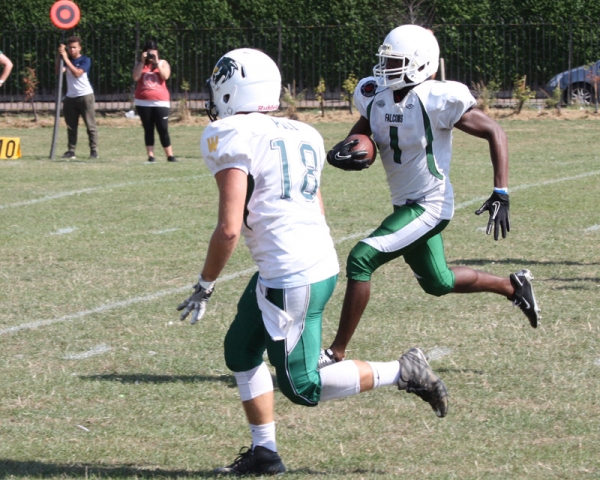 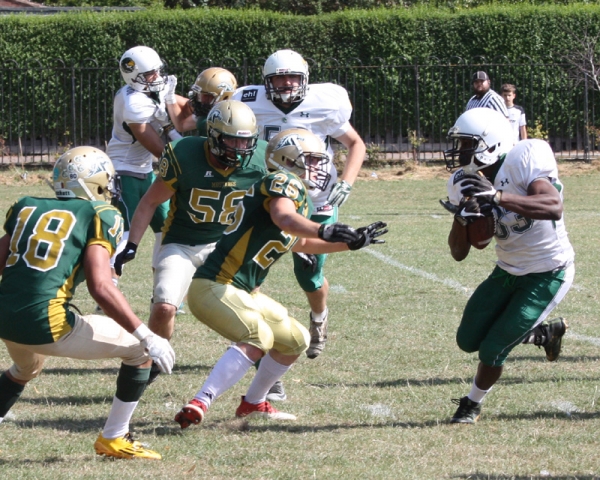 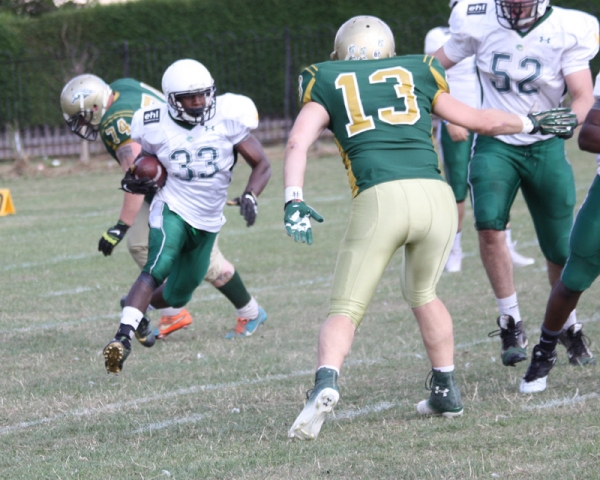 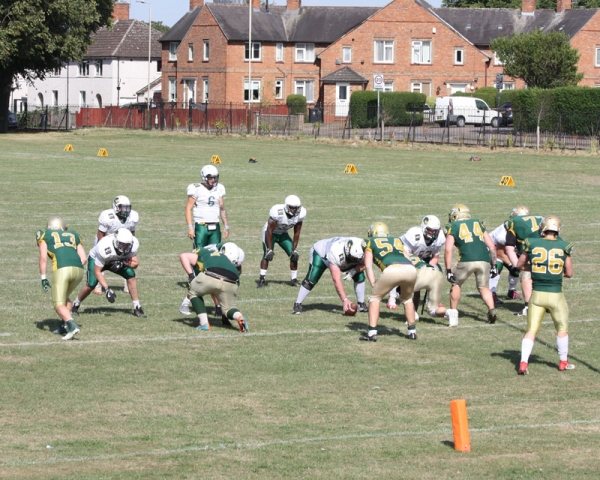 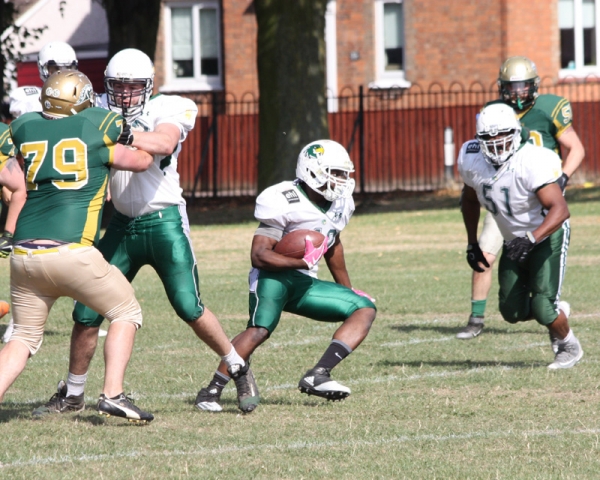 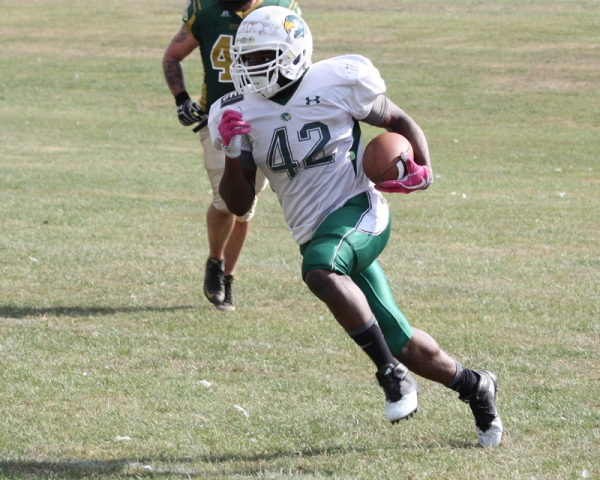 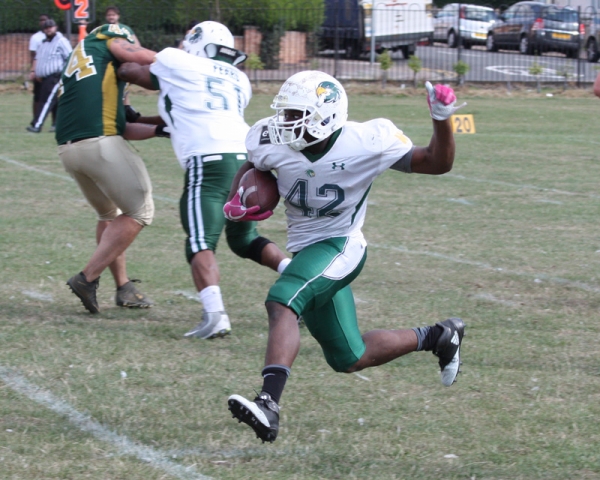 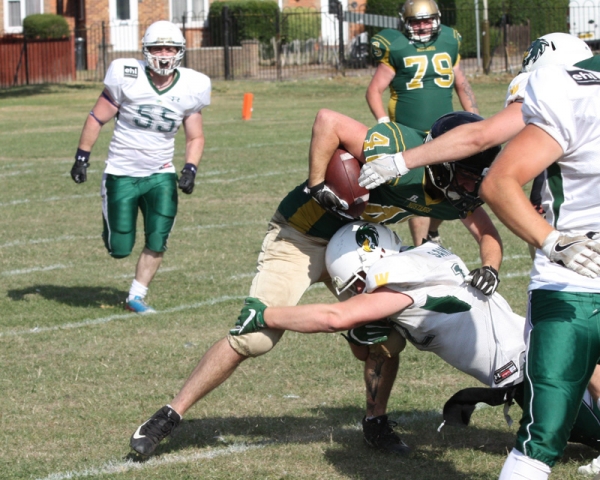