Pictures
Leicester Falcons put up a spirited defence but ultimately fell to local rivals Tamworth Phoenix on Sunday.  Phoenix running back Elliot Walters made the difference with a hat trick in a game where offence was scarce on both teams.

Neither team could get any offence going on the ground in the first quarter, with the Phoenix stuffing the line of scrimmage and forcing quarterback Marcus Urbanski to go deep.  The one long pass that was competed went for a score, through Tamworth receiver Ben Burslem.  With the Falcons running game not moving the ball it was left to Urbanski to scramble, as the Falcons leading rusher on the afternoon, and as the second quarter began Leicester finally managed to move the ball, partly thanks to a fake punt and run from Taylor Brown. Unfortunately the drive stalled in the red zone and the subsequent field goal attempt was blocked. 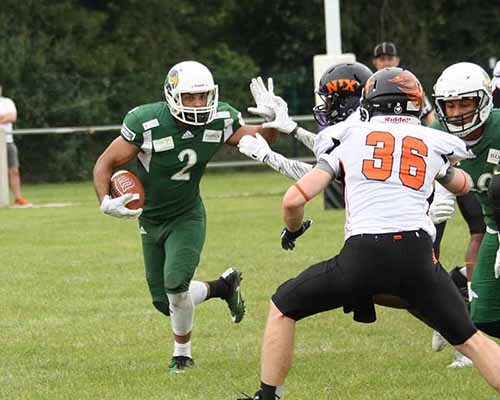 Holding the league leaders to one score in the first half was seen as a success, but Tamworth came out all guns blazing and scored on the first play from scrimmage of the second half.  Elliot Walters broke away from the Falcons linebackers and ran for a 51 yard score, and quickly could have had another, but had a touchdown disallowed for a facemask penalty.  The Falcons owed thanks to their defensive line to keep the score line close, with Arthur Harbi amongst the players to record a sack. As the fourth quarter began Walters added his second from short yardage, before the Falcons’ best moment occurred when Taylor Brown jumped a short pass attempt and returned the ball 60 yards for an interception touchdown. The momentum didn’t last and Walters completed his hattrick in the final seconds.

The loss keeps the Falcons fourth in the table, one win clear of the relegation zone.  Their next match is in two weeks in what is likely to be another difficult encounter away to Merseyside Nighthawks.