This Sunday we are celebrating a major milestone as Richard Swain becomes the first Falcon to reach one hundred appearances for the club.

Richard has been a mainstay of the offensive line since the Falcons’ first league season in 2008. A captain since 2011, he also spent time as club Treasurer during the ‘player committee’ years, and has mentored many linemen over the years. Despite playing offensive line, he has 50 combined yards for the team from three kickoff returns and a fumble recovery. We will be honouring Richard before kickoff on Sunday.

What made you start playing American Football?

I always wanted to play. One Thursday night in 2008 I turned up to work the front door at Life Nightclub and Graham Austin asked if I fancied going training with him.

I get a buzz from it, it’s fun tactical violence! And unlike playing rugby which I grew up doing – I don’t have to run around as much haha

What’s been your best moment as a Falcon?

I’ve been very lucky to have a lot to choose from! But the Clubs first Div 2 Britbowl in 2009. Everything from the pre-game tunnel to the final 33-32 scoreline.

My favourite NFL player of all time is Thomas Davis, the Carolina Panthers Linebacker. I’ve had my own knee issues from playing rugby and he has come back from 3 knee surgeries on his ACL. Like me he’s also a Captain and I think we both try to lead by example.

This is a tough one – Hollywood make great Football movies! For me it comes down to either Any Given Sunday or Remember the Titans. I love watching both. 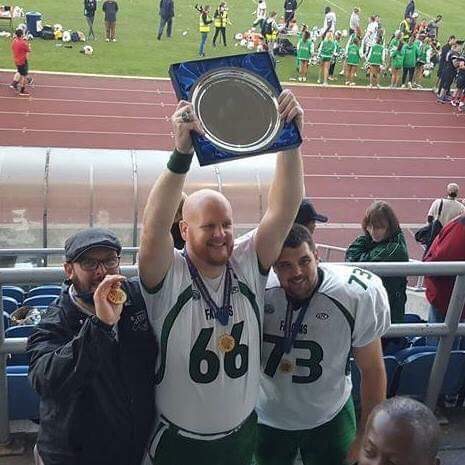